It is rightly said that some mortals wish only to see the world burn. Many embrace such nihilism to court the favour of blasphemous gods. Others out of irreversible despair. But for many in the war-ravaged Empire, the death of all that is brings forth new hope, for the prospect of a just and holy realm reborn from tainted ash.

Where, in another life, a weary Victor Saltzpyre stared into the flames of Ubersreik and found the courage to confront his superiors, in this one he found only the solace of the furnace, of a world fit only to be cleansed in righteous fire. Thus fell away the earnest – if bleak – Witch Hunter, and the Zealot was born. Victor no longer places his trust in the organisations and strictures of the Empire, but in Sigmar alone.

Victor the Zealot is a furious melee fighter, favouring heavy flails and holy rage as expressions of worship and tools of battle both. Faith can carry a body through the most horrendous of wounds, and the Zealot has dark-eyed faith to spare…
- Vermintide 2 Official Website

Zealot is one of the three Careers from which Victor Saltzpyre can choose.

This career is available at level 12, after Witch Hunter Captain and Bounty Hunter.

Since losing his eye in a fateful encounter with the Skaven, and his following obsession with the ratmen, Victor Saltzpyre could no longer handle the Order's lack of support for his convictions. Deeming all worldly organisations insufficient for the monumental tasks ahead, Saltzpyre slowly descended into a fanatical worship of Sigmar, and set out to cleanse the unrighteous himself.

In battle, the Zealot is a furious melee fighter who thrashes heretics, heathens and monsters with flails and maces in a holy rage. Although lightly armoured, the Zealot is capable of suffering grievous wounds and continuing to fight— bolstered by his faith alone. 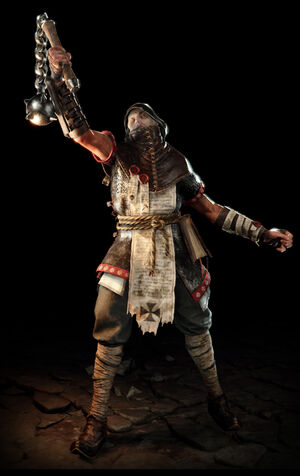