Found in, but not to be confused with, the Mission: The Blightreaper.

The Blightreaper is a Chaos runesword with corruptive powers. It was held in a Temple of Sigmar in Bögenhafen, but was moved to Taal's Horn Keep after the runesword caused the town to succumb to Chaos.

Forged by renegade blacksmith Grungni Ironheart, the Blightreaper is a sword of the blackest rumour. For a thousand years it passed from one mortal to another, imbuing them with dreams of conquest furled by the power of Nurgle. From the Mountains of Mourn to the Old World's western shores, the Blightreaper filled burial pits and fed sacrificial cauldrons, drowned kingdoms in pestilence and turned the blood of heroes into festering slime. With the Rotblood invasion the cursed sword returned to the Empire and fueled the mad ambitions of Warlord Droog Warfiend. Droog's recklessness saw the blade seized and sealed away in a Sigmarite temple in the Göttenplatz district. 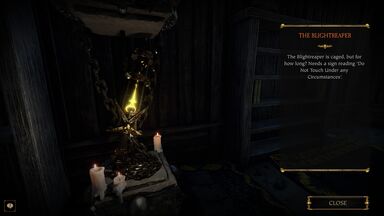