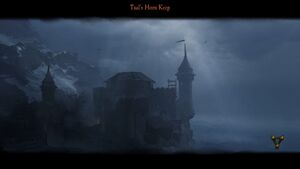 NOTE: The Keep is currently being renovated and as such, some rooms have already been moved around.

The home base of the Heroes.

While within The Keep, players can change Heroes and Careers, allocate Talents, change and Craft Equipment, and start Missions. Players can also talk to NPCs, consume Potions, throw Bombs, attack Training dummies, and interact with Items such as the hourglass. The keep is also constructed in such a manner that there are various jumping puzzles on which to practice.

Various player menus are also accessible as physical workstations inside the keep. 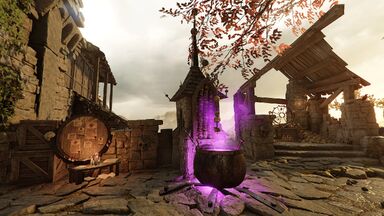 In an area available in the base game, the Arcanum becomes more important to people who own Winds of Magic. There the DLC owners can forge their Weave-specific Weapons, look up Olesya's Tally, which displays the season's high scores, as well as enter the weaves. 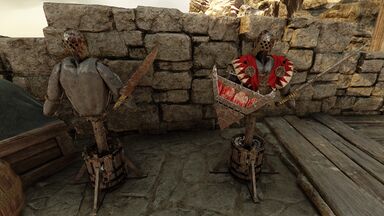 Several dummies can be found in the courtyard along with targets. Dummies can be picked up and moved to other locations in The Keep, although they will respawn in their original location if the player leaves The Keep for any reason. The dummies are available in an armoured and unarmoured version, and display damage taken above their head. Dummy damage is standard damage. Headshots are yellow, critical hits are orange. Some forms of damage and attacks such as the Hagbane Shortbow's poison and Sienna's staves might not currently affect the dummy properly. Dummies are also not currently affected by Passives, and it is unclear if dummies count as Infantry or Monster or Berserker and etc. for calculating Equipment bonuses. They do however count as Chaos and/or Armoured depending on the dummy.

While training dummies are not perfectly accurate in determining your in-game damage, they are still quite useful for giving players a general idea of what special abilities like 'Enhanced Critical Power' look like in terms of damage output.

The Bridge of Shadows is a portal created by Olesya in order to help the heroes get around Helmgart more easily. In the first Vermintide she used a cart pulled by shadowy horses, but it appears her power has grown since. When a mission is active, a large hemisphere appears, as Olesya performs the necessary magic to begin the teleportation sequence. All players (not including bots) must be inside in order for the mission countdown to complete. If a player leaves the Bridge of Shadows during the countdown, the mission start is delayed until everyone reconvenes, at which part the countdown starts again. After a mission is completed, all active players must enter the end Bridge of Shadows to return to the keep. Heroes can take damage while within the Bridge of Shadows, but enemies cannot enter it. Friendly fire can still be dealt to your allies, so refrain from throwing Bombs at them as a joke.

Door that leads to the Pilgrimage Chamber.

The keep changes as you advance through the campaign.

The exterior of the keep is blocked off by rocks until you beat one mission.

A portion of the keep is blocked off by rocks until you level two characters past level 1.

After finishing Act 3 missions, two ladders will be added to the upper floors that will give access to the crow coops.

Initially there is a bed for each of the heroes in the main chamber, but as you level each of them to 10 they each acquire their own private quarters elsewhere in the keep. 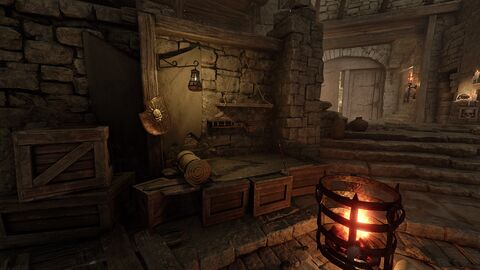 Kruber's bedroll is to the front right of Spoils of War pedestal. 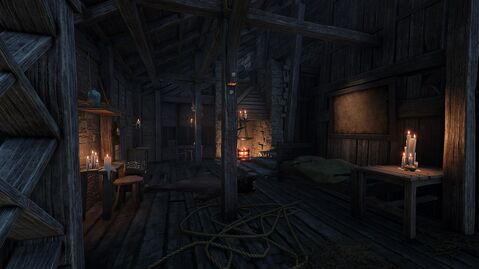 His quarters are up the stairs from the trophy room. 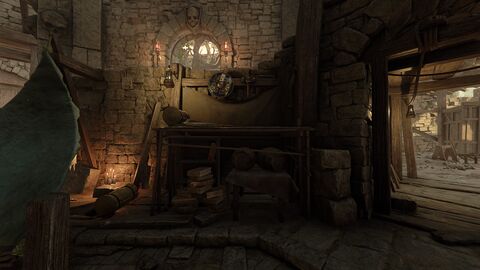 Bardin's bedroll is to the left of Lohner's Emporium of Wonders. 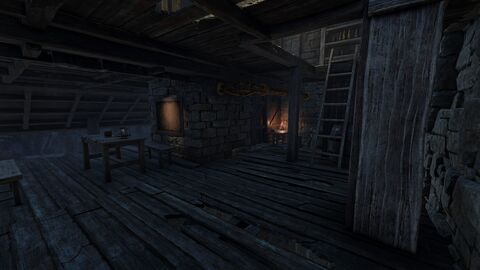 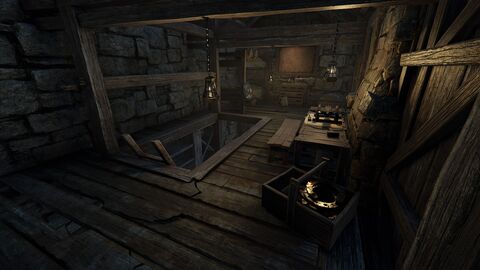 His quarters are just up the stairs from the water wheel. There is a small chance to find a Loot Die in the Chest in this room. Picking it up does not seem to have any benefit. 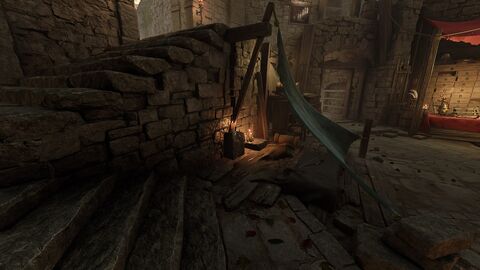 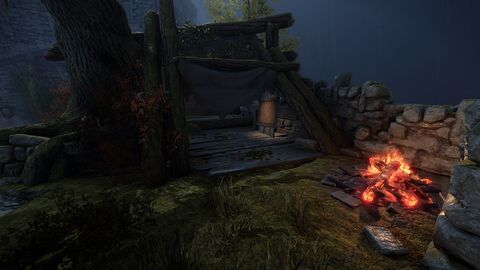 Her quarters are in a tent pitched against the Courtyard tree. 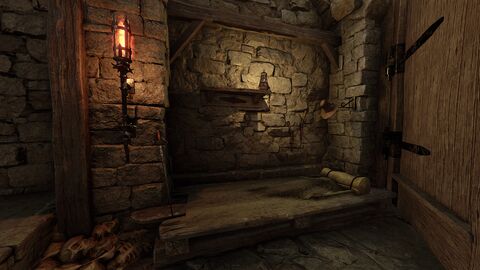 Victor's bedroll is to the left of the entrance. 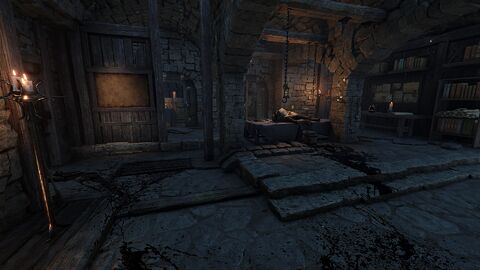 His quarters are in the dungeons below The Keep. 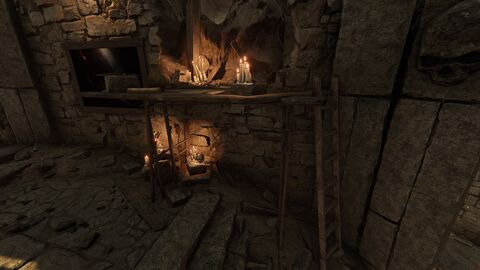 Sienna's bedroll is located up the stairs from Kruber's. 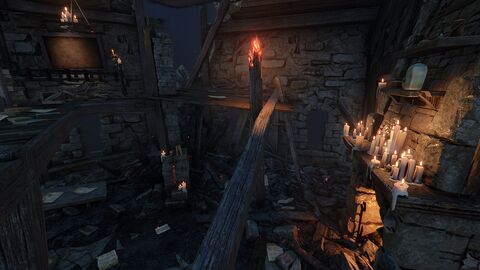 Additionally, Catrinne of Aldenstein's quarters is also present in the keep although she has yet to make her appearance. It is accessible via a mysterious tunnel behind Lohner's Emporium of Wonders. 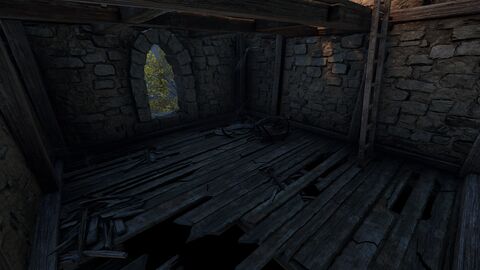 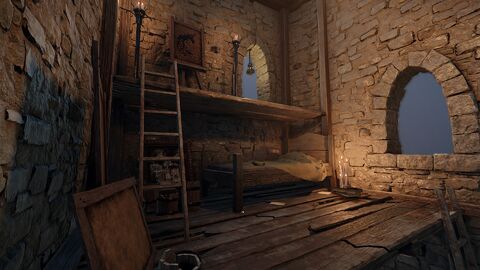 As you finish Helmgart, Bögenhafen and Ubersreik campaigns on each difficulty various banners get added and upgraded accordingly

There are several picture frames on the walls which you can now place Paintings in. At one point in the beta could be set to display a variety of images.

The trophy room will be populated with relics after completing certain missions, usually involving killing Bosses. The skull-like trims of the trophy stands will upgrade in quality when completing the missions on a higher difficulty, with the highest material being gold for Legend and Cataclysm completions. The relics obtainable are as follows:

When a player arrives in the keep, Franz Lohner will give a report of the weather. The weather in the keep is randomly determined each instance so exiting to the main menu and returning to the keep will cause it to change. Varieties include Day, Evening, Night, Morrslieb, and Rain. 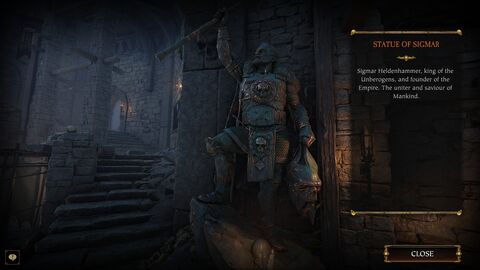 Owners of the Collector's Edition of Vermintide 2 will find a Statue of Sigmar just inside the entrance to their keep.

Various Special Events add decorations to the keep for a limited time.