Not to be confused with the Stormfiend.

The Stormvermin is a type of Skaven Elite in Vermintide 2.

Also called "Blackfurs" by the Heroes, Stormvermin wear armor and carry halberds or a sword and shield. They are easily spotted by their red/orange armour and height, which makes them stand out among the Clanrats they are often seen with. Additionally, Stormvermin make up the Skaven patrols encountered during missions.

Stormvermin are the fighting elite of the Skaven clans, marked out by crested helms, banded armour and rich red robes. Where other Skaven wield scavenged weapons, Stormvermin train in the use of heavy halberds, a single strike of which can slice through armour to the flesh and bone beneath.

Granted bravado by their warrior’s status, Stormvermin seldom shrink from the prospect of battle. Relying on armour to preserve them from harm, they attack unceasingly, using the halberd’s weight to batter aside the foe’s defences before landing a killing blow. A quick-witted warrior is often able to overcome a lone Stormvermin by focusing his blows where the armour is weak (the head). Alas, Stormvermin seldom attack alone, and placing a precision strike is all the harder when surrounded by a shrieking mass of Clanrats.

The standard Stormvermin carries a halberd, which gives him long reach and a slow, powerful overhead slam attack. The clothing underneath their armor is painted brightly red.

Some Stormvermin carry a sword and metal shield. As opposed to the wooden shields carried by Clanrats and Bulwarks, the shields of Stormvermin don't break and give them the ability to block many blows, making it harder to take them head on. However, their attacks do not have the range or damage of a Halberd Stormvermin. Shielded Stormvermin can be distinguished from their kin by their orange armour. 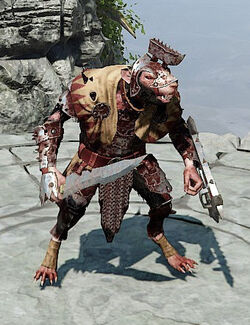