A Challenge Awaits. Embrace it swiftly for it will not linger long.

From time to time the game has special events which change the look of Taal's Horn Keep.

Each event also has special Quests which can often reward a special Portrait Frame.

The 2018 event had a quest to get the "Champion of Khorne" frame by completing 10 quick play games.

The 2019 event had the Weekly Event featuring the Modifiers Mark of Khorne and Send in the next wave! It also gave four quests:

Champion of Khorne - reward for the first ever event

The event was presented on patch 1.1.1

The event had a quest to get the "Rhya's Blessed" frame by completing 10 quick play games.

This event was presented on patch 1.4.1

It hasn't introduced any changes to the keep's visual appearance, but included two seasonal quests rewarded with seasonal portrait frames:

NOTE: Patch notes have stated custom games are valid for this quest as well

This event was presented for the Vermintide 2 one and two year anniversary along with the Vermintide: End Times five year anniversary. It takes place on a Helmgart map that mixes some elements of previous levels. Bottles of ale are disseminated in the second half of the level, and players have to drink them so as to not fall in an Hungover state, where they cannot use their special ability. Drinking three bottles in a row grants a greatly accelerated cooldown on your special ability, but drinking more will immediately put you out of combat.

The quests it brought were : 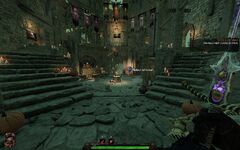 This event reigns during Halloween and adds pumpkins and more candles to the Keep to add to the season's atmosphere. Not only this, but during the event most of the outdoors missions are set in night mode, where the only lights are cast by Mannslieb and Morrslieb in the sky. The event has a themed Weekly Event, two event quests and the frame "Fangtastic Fortitude" has been brought back.

The portrait frame "Fangtastic Fortitude" can be obtained by playing a game with a person who also has the portrait. The other one, "Deathwalker", is obtainable from an event mission.

The halloween quests are:

The accompanying Weekly Event featured the Modifiers Send in the next wave! and More Specials and had the following three event quests: