Slayers can be counted amongst both the deadliest and most tragic of warriors. The embodiment of implacable, calculating destruction, they plunge into the most desperate of battles, thirsting to expunge past failure or personal tragedy in a blaze of glory. Yet there is nothing rash or reckless in the Slayer’s quest. The only thing that matters more to such a dwarf than a grand death, is postponing that demise long enough to see another foe brought to bloody account.

Unbeknownst to his comrades, Bardin has long borne a burden on his heart. In the carnage at Ubersreik, that burden blossomed into a new and terrible ambition. Thus Bardin cast aside the Ranger’s garb in favour of the Slayer’s spiked hair and tattooed shame. Now, an honourable death is the only thing to satisfy him, though such is his formidable battle-skill that death may yet be a long way distant.

The Slayer Oath prohibits Bardin from using ranged weaponry, but his capacity for slaughter remains undimmed. Driven by pride, determination and the appraising eye of a tempered killer, Bardin is a whirlwind of carnage, equally lethal with hand axes or the cleaving fury of a gromril great-axe. He is dwarfen vengeance personified, and the bringer of death.
- Vermintide 2 Official Website

Slayer is one of the three Careers from which Bardin Goreksson can choose.

This career is available at level 12, after Ranger Veteran and Ironbreaker.

Bardin has been carrying a heavy burden in his heart, and after joining the band of heroes who saved Ubersreik, he finally allowed himself some time for brooding and introspection. A life changing, or rather life ending, decision was made. Bardin became a Slayer, a warrior who has taken an oath - vowing that nothing but an honorable and glorious death that shall expunge the shame.

In battle, the Slayer is a melee whirlwind of carnage. A true specialist in close quarters slaughter, the Slayer oath prohibits Bardin from using any Ranged Weaponry. 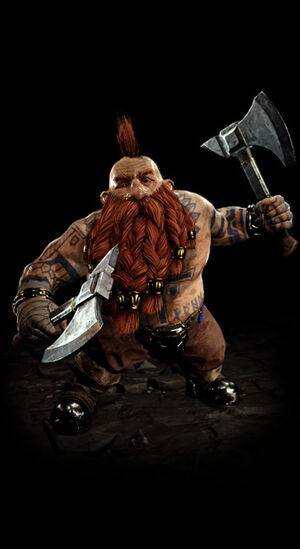