Shades are exiles, scions of a noble line ousted from the jagged towers of Clar Karond. They haunt the wilderness of the Blackspine Mountains like vengeful ghosts, preying on all who enter their domain. If the moment – or the price – is right, Shades will sometimes accompany dark elf armies to war. Some travel even further afield, bringing their murderous skill to distant shores in exchange for gold or vicarious thrill.

In the aftermath of Ubersreik, Kerillian’s dreams were a jumbled cacophony, and one of the most lucid visions spoke of an ancestor who bore the exiled blood of Clar Karond. The dreams did not emphasise the future, but here and now. Through the mists of memory, a cruel voice spoke, urging her to reclaim the mantle of her forebear. Her count continues, but in glory, not in penance.

As a Shade, Kerillian treads an assassin’s path, striking unaware or distracted foes when they are most vulnerable to her wicked blades. She is fleet-footed death, come to claim the blood of the living.
- Vermintide 2 Official Website

Shade is one of the four Careers from which Kerillian can choose.

This career is unlocked at level 12, after Waystalker and Handmaiden.

As the pain of exile continues to fester within Kerillian, a new voice introduced itself in hushed tones in her dreams. The whispers promised purpose and meaning and Kerillian, being sick to death of the world of men, listened. The voice belonged to Khaine, the God of War and Murder. Having accepted to heed his call, Kerillian embarked on a sinister journey to find her true self.

In battle, the Shade is a master of stealth, a deadly assassin striking from the dark, able to outmaneuver any foe with fleet-footed movement and otherworldly agility. Devoted to her new faith, the Shade prefers weapons favored by Khaine to do her bloody work. 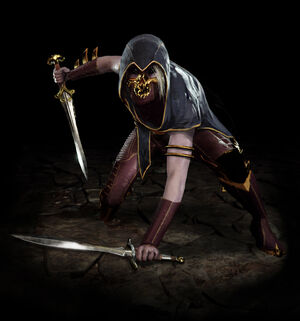 If Kerillian attacks an enemy to get out of stealth with Infiltrate, she will inflict 10 to 22 times the regular damage of this weapon. The bonus depends on the nature of the weapon, with Dual Daggers having the highest bonus. Charging the attack will as usual double the damage done, leading to potentially 44 times the weapon's regular damage.