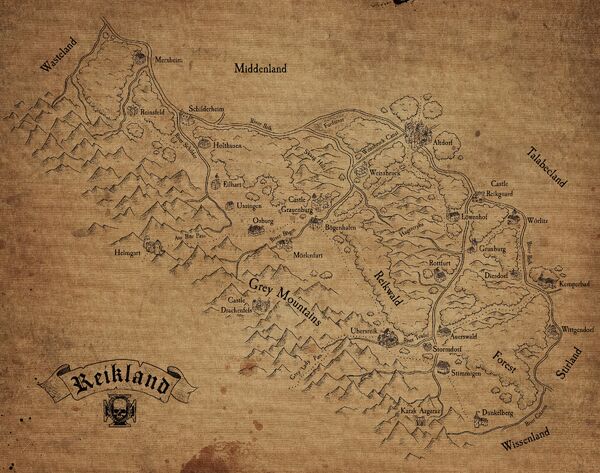 The Grand Principality of Reikland, or simply Reikland, is a major and founding Imperial Province that lies to the south-west of the Empire of Man. The province is the main location for the events of both Vermintide 1 and Vermintide 2.

Reikland has been the most important state of the Empire for nearly one hundred years, for it surrounds Altdorf, the Imperial capital, and its armies are those under the command of the Emperor himself. It was also one of the founding Provinces of the Empire during the reign of Sigmar Heldenhammer. Indeed, within the eyes of the Empire citizenry, the territories of the Reiklands are considered the very heartland of the Empire.

The mines of the Grey Mountains yield valuable ores ranging from iron to gold, as well as marble and precious gems, whilst the Reikwald Forest, generally considered safer than woods in other parts of the Empire, yields valuable timber that supports a thriving boat-building industry. River travel is the most common way to get around Reikland, since the majority of the settlements are along the river Reik itself.

At their best, Reiklanders are friendly, sociable, and open-minded, more so than the rest of the Empire. Reiklanders are optimists who believe that the best is yet to come. They point out several reasons for this: the natural bounty of their lands, educated and energetic populace, and the fact that Sigmar was one of them.

Helmgart, together with its surroundings, is the main location of Vermintide 2. It is a now devastated town, caused by the invasion of the Skaven and Chaos forces. The center of town has completely collapsed due to the extensive labour on the Skittergate and its surrounding infrastructure.

Ubersreik, as well as its surroundings, is the main location of Vermintide 1 and also visited in the second DLC of Vermintide 2. It was one of the most important trade centers in Reikland, situated a little below the Grey Mountains. During the first invasion of the Skaven, the town was attacked and most of its inhabitants killed.

The Grey Mountains are an enormous range of mountains covering the south-western region of Reikland, so high and rugged that only a few passes cross them. The mountains are riddled with Dwarfen Tunnels, many of which are abandoned. Some holds still exist in the highlands above Reikland, but these are islands in a sea of orcs, goblins, Skaven, and Mountain Trolls. The two main passes over the Grey Mountains are Axe Bite Pass and Grey Lady Pass. The passes are guarded by Imperial Fortresses of Helmgart and Ubersreik respectively.