Rangers forsake the dark comfort of hearth and hold, roaming far and wide to vanquish foes far from the walls of their homes. They seldom receive proper appreciation from their dwarfen brethren and are all too often viewed as eccentric, or even wits-addled. Nonetheless, they are vital to a hold’s ongoing defence, hardened as they are by the harsh environments of the surface world, and accomplished in the arts of tracking and ambush.

Bardin’s experiences in Ubersreik have honed his skills to that of a Ranger Veteran. Steady of hand and keen of eye, he adapts swiftly to the horrors vomited forth from the shadows and battles implacably until they breathe no more. The search for Karak Zorn still weighs heavy upon Bardin, but the Reikland’s perils compel him to attend to more urgent matters.

In battle, Bardin the Ranger favours a head-on approach, using his arsenal of ranged weapons to punish the foe from afar. Yet he is no stranger to the press of melee. Should the need arise, dwarfen steel will punish those enemies foolish enough to stray within Bardin’s reach. Maybe not with the same flourish as Cousin Okri, but near enough to count.
- Vermintide 2 Official Website

Ranger Veteran is one of the three Careers from which Bardin Goreksson can choose.

This career is the first one available, while Ironbreaker and Slayer are unlocked at level 7 and level 12 respectively.

Still searching for his lost dwarfen hold and facing dangers with boisterous merriment, Bardin Goreksson has through his adventures in Ubersreik become a Ranger Veteran.

In battle, he is a dead-eye shot with a multitude of Ranged Weapons, and more than capable of sending limbs flying or pulverising skulls in melee should the need arise. The Ranger Veteran wreaks havoc on any battlefield. 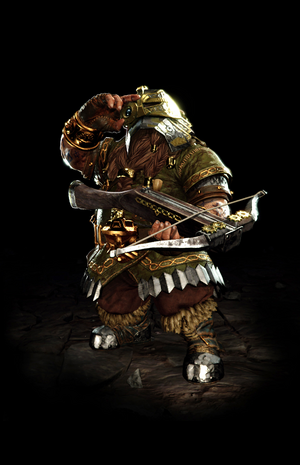