Though Sienna’s angry departure from the Bright College lies many years in the past, Thyrus Gormann’s critique remains with her still. As much as she curses the old man for his sharp tongue, Sienna knows he was more right than wrong. But the arrogance of youth too easily callouses into the habit of middle-age. Though part of her knows that she is not a true Battle Wizard – she relies too much on instinct and too little on her lessons for that – Sienna tells herself it is better to be a free-spirit Pyromancer than an adept caged by rule and ritual.

Sienna credits her survival in Ubersreik to this creed. How many times did her quick-thinking save her companions from annihilation? How often did an instinctive casting rescue victory from the ashes of defeat? And yet, Sienna is honest enough with herself to admit that she lacks the control for the most austentatious of spells. Only by channeling her wildness into tightly-focused castings can she hope to keep control of the power blazing within.

As a Pyromancer, Sienna is a ferocious single-target annihilator, specialising in incinerating the hardiest of enemies at a brisk pace, one at the time.
- Vermintide 2 Official Website

Pyromancer is one of the three Careers from which Sienna Fuegonasus can choose.

This career is available at level 7, after Battle Wizard and prior to Unchained at level 12.

As the Pyromancer, Sienna revels in her power but is careful not to overstep the mark, at least when out of battle. Through instinct and the half-remembered lessons from the Bright College, she balances the magic she wields with enough discipline to skirt damnation.

In battle, the Pyromancer career turns Sienna into an efficient single-target annihilator, specializing in incinerating the hardiest of Enemies at a brisk pace, one at the time. 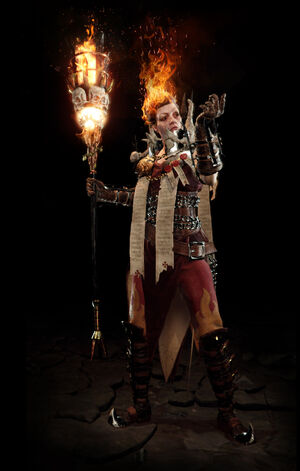