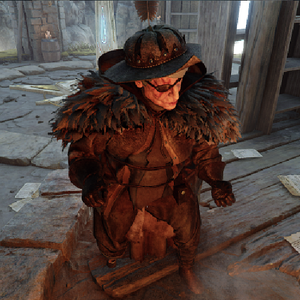 Olesya Pimenova is a character in Vermintide 2.

Olesya’s caustic manner enshrouds a soul hardened on the harsh steppes of Kislev. Though little given to discussing her past, a glint of pride shines in her eye when she speaks of the charge at Sebasta, with the banner of Ursun fluttering in the wind. And the dagger seldom far from her hand is a strange blade, more like a hilted lance-point than an old woman’s dirk.

It invites questions, to be sure, but little of Olesya’s manner does not. Why did she leave Kislev? How did she come to be in Lohner’s company? Who – if anyone – does she serve? But Olesya’s past is a closely-guarded secret, and enquiries are brusquely deflected, if they are tolerated at all. One thing that is no secret is that Olesya prefers her own company best of all, and close acquaintances are suffered scarcely less readily than complete strangers.

It should therefore be of no surprise that this bitter-tongued drab conceals a formidable magical talent. This affinity was seldom on display during the battle for Ubersreik – save perhaps Olesya’s ability to sequester a cart in places no cart should readily fit. The reason is a matter of debate amongst those few acquaintances who survived the Vermintide. Some have suggested that her talent was in fact awoken during those bleak days, fed by grimoires and tomes salvaged from the city’s ruins, and artefacts from the bowels of Castle Drachenfels. Others mutter darkly that Olesya possessed such skill all along, wielding it under the guise of the wizard Christoph Engel…