The Empire is awash with mercenaries, their manner ranging from hard-bitten coin-hoarders, to nobler souls eking out a living while balancing good deeds with bad. Such a life is far from glorious, for too often the only folk who can pay for hired blades are the very people who shouldn’t give commands to a dog, let alone armed men. But sellswording’s a living – even if it is all too often a short one.

Kruber fell into the business by chance as he joined Saltzpyre’s retinue. He based this decision solely on the destination of the Witch Hunters upcoming mission. Together, with Sienna Fuegonasus as prisoner, they would travel to Ubersreik.

Working for Saltzpyre proved to be a trial all on its own, but when compared to his previous cowardly commanders, Kruber actually preferred fighting alongside the dauntless Witch Hunter. During and after the Ubersreik campaign, Kruber continued to work for Saltzpyre, who in turn relied on Franz Lohner for information. Lohner, the Innkeep. provided a mysteriously steady supply of coin, jobs and ale. This kept Kruber content most days – especially given that Lohner seems to have the Empire’s interests at heart. And for the other days? Well, for the other days, there’s Bugman’s beer, and Estalian brandy, and that strange plum liqueur that Olesya carries around in a battered tin flask…

As a mercenary, Kruber is a versatile fighter, wearing just enough armour to strike a balance between protection and mobility. His training lends itself to close-quarters battle, but his hunter’s eye is as keen as ever, should ranged combat be necessary.
- Vermintide 2 Official Website

Mercenary is one of the four Careers from which Markus Kruber can choose.

This career is the first one available, while Huntsman and Foot Knight are unlocked at level 7 and 12 respectively.

When Saltzpyre recruited Kruber for his retinue, it was the former State Trooper’s first venture as a Mercenary. The new profession lit a fire within him, and a desire awoke to one day lead a company of his own as a Mercenary Captain. Perhaps the events in Helmgart will lead him down this path.

In battle, the Mercenary is a versatile fighter with armour balanced to provide ample protection while not severely restricting mobility. He is capable of both close quarters mayhem and shredding the enemy with ranged fire. 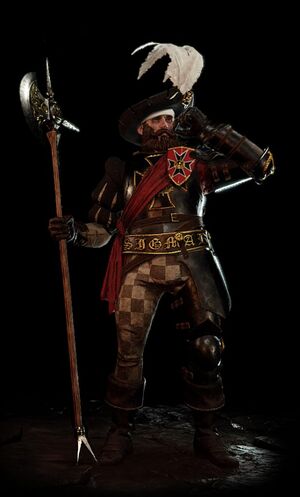