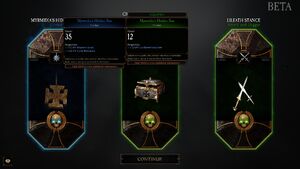 Loot is the Equipment and Heroic Deeds found in loot boxes. A loot box contains 3 items of which at least 1 will always be equipment. An exception to this was the Bögenhafen Strongbox which is no longer available since the introduction of Lohner's Emporium of Wonders.

Items are sent to your inventory. If your item count across all Heroes exceeds a certain amount (846 or above), you can't open any more loot boxes.

Instead you will get the following notification: "Inventory full. Salvage items to open Spoils of War."

Loot boxes are rewarded in a number of ways, which determines the type of the box. Rarity and the maximum Item Power of the gear contained within the box are dependent on the box type. Note that most types of boxes also have a box Tier, which is explained at the bottom.

The game keeps track of the highest Power value you've ever obtained for each equipment slot (across all Heroes & Careers), even if you Salvage the equipment. It then calculates the average highest power across all 5 equipment types. New items received from a loot box (or by Crafting) have a power level of this average highest power -5/+10, up to the limit listed above. At least loot from boxes depends on the total level of all your characters on game accunt.

When completing a Mission, the tier of the obtained loot box will be determined by a system which replaced the dice game from Vermintide 1. Accomplishments made during the mission will give you points (shown by a progress bar).

Depending on how many points you score, you are given loot boxes of a higher tier:

Higher tier boxes have an increased chance to give higher Rarity equipment.