Ironbreakers are the stalwart protectors of the dwarfen holds, considered by many to be the elite of their kind. Clad in magnificent runic armour and brandishing weapons of incomparable make, they muster in the deepest, darkest tunnels, prosecuting an endless battle against Skaven and worse.

Before he embraced a Ranger’s duties, Bardin earned his beard as an Ironbreaker in the great hold of Karak Norn. Skills burnished in darkness did not lose their lustre in the light. Following the defence of Ubersreik, Bardin felt the Ironbreaker’s oaths and gromril armour calling him once again, for only an Ironbreaker could stand as a bulwark against the evils gathering against the surface world.

As an Ironbreaker, Bardin is the indomitable bastion upon which the Vermintide breaks apart, a rallying point for straggling allies and a grim promise of death to rampaging foes. Be they ratman or Rotblood, no foe shall easily overcome the Ironbreaker, not while he has breath in his body and dwarf-forged gromril in his hand.
- Vermintide 2 Official Website

Ironbreaker is one of the four Careers from which Bardin Goreksson can choose.

This career is available at level 7, after Ranger Veteran and prior to Slayer at level 12.

Ironbreakers are peerless tunnel fighters, armed and armoured for never-ending contest against Skaven and other Monsters of the depths.

In battle as an Ironbreaker, Bardin will be the indomitable wall upon which the Enemy's charge will break, and a bastion of steel for his comrades to rally around.

Ironbreaker has 2 unique weapons that can only be used on Ironbreaker: Drakefire Pistols and Drakegun.

Used the following template to fill in the talents for this career: http://vermintide2.gamepedia.com/Talentstable 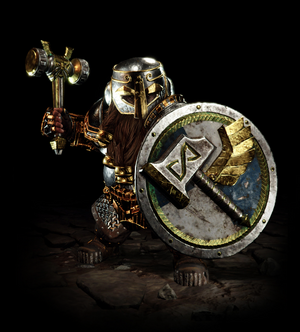