Not all the Empire’s battles are fought in a clash of battle lines, regimental colours whipping and snapping in the breeze. In the tangled murk of the Reikwald, and a hundred other forests, determined huntsmen track raiding warbands, laying them low with volleys of arrows and lead shot. It isn’t soldiering as understood in the barrack-rooms of Altdorf, but it is vital work, nonetheless.

Kruber has always sought a simpler life. He grew to manhood in Taal’s sight, and a youth spent on his parents’ farm gave him a taste for the labours of the soil. Had he not enlisted, Kruber would still have found himself caught up in war, for in an Empire under siege no man keeps what he cannot fight for – soldier and farmer alike too easily become slave.

After Ubersreik, Kruber realized his disillusionment of army life wasn’t temporary and with the ghosts of his past still clawing at his soul, he sought solace and found it in returning to his roots. By walking the wilds of the Empire and devoting himself to Taal and Rhya, the Gods of Nature, Kruber was allowed to breathe and focus, at least as long as he had a stiff drink or two at hand.

As a Huntsman, Kruber favours the weapons of the deepwoods – the arrow and the bullet. He cuts a very different figure without uniform and armour, but he is all the lighter on his feet for that, able to stay one step ahead of the foe, and rain down death from afar.
- Vermintide 2 Official Website

Huntsman is one of the four Careers from which Markus Kruber can choose.

Walking the path of the Huntsman, Kruber returns to his roots and finds solace in the worship of Taal and Rhya, the Gods of Nature. The Huntsman excels in ranged combat, delivering death from afar with bullet and arrow. Moving as one with the land, the Huntsman dons light armour, favoring speed and agility instead of heavy plate.

In battle, the Huntsman is steady with his aim (especially after an ale or twelve). Relishing both the thrill of long range kills on particularly troublesome foes, as well as the satisfaction of mowing down waves of oncoming hordes through devastating firepower. 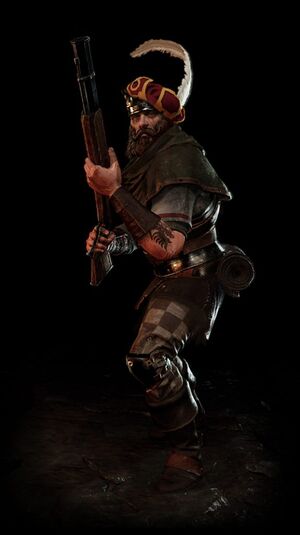