The elves were not always a divided race. Millennia ago, their empire spanned the globe, ruled over by a wise Phoenix King. Though such times are spent as if they had never been, remnants remain; traditions, tales… and even a few ruins. Only a few shrines to the mother-goddess Isha remain beyond the bounds of the three great elven kingdoms, and fewer still any longer have defenders.

Kerillian has ever fought the darkness in her soul, trusting to Lileath to guide her through bleak times. However, in the wake of Ubersreik – slaughter on a scale she’d never before witnessed, and for which she felt a hidden pang of responsibility – she sought guidance of a haler power. Guided by a new voice, she came upon a long-abandoned shrine of Isha, founded in the days before the elves became divided, and gave herself over to the ways of a Handmaiden.

As a Handmaiden, Kerillian favours melee combat, using a spear’s reach to deliver death to her foes before their own weapons bite flesh.

Handmaiden is one of the three Careers from which Kerillian can choose.

This career is available at level 7, after Waystalker and prior to Shade at level 12.

Guided by Lileath, the Elven Goddess of the Moon, Kerillian was confident in the visions and dreams she had received from her favoured deity. One night, after yet another day of butchering Skaven, something extraordinary happened. The Everqueen herself, the spiritual leader of the High Elves, reached out directly to Kerillian in a dream. Next morning, Kerillian woke up in awe and started to slowly digest the magnitude of what had just occurred…

In battle as the Handmaiden, Kerillian favors melee combat, using the reach of her spears to deliver death to her foes before they are in range to retaliate. Should an Enemy close the distance, the armour of the Handmaiden is able to withstand a barrage of cuts, allowing Kerillian to retaliate with impunity. 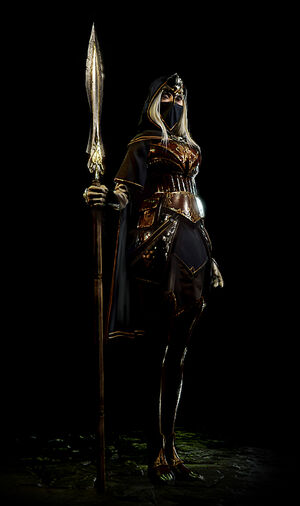