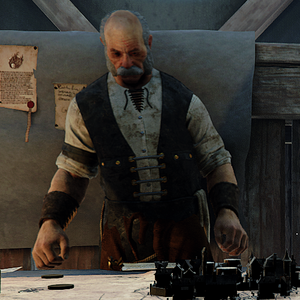 Franz Lohner is a character in Vermintide 2, located in Taal's Horn Keep. He is responsible for the Mission briefs the Heroes receive at the beginning of each mission and selling Cosmetics through his Emporium of Wonders. He is well known as the innkeeper of the former Red Moon Inn.

Lohner is a pragmatic man and simultaneously a bit of enigma. He knows more than he should, but doles out information only as needed. He takes the role as an affable, authoritative landlord, but can be more than scolding if his charges disappoint or underperform.

Who is Franz Lohner? Nobody seems entirely sure. Certainly he’s not the bluff innkeeper-in-exile he holds himself to be. After all, wasn’t he the brains behind the defence of Ubersreik? And it seems very much as if he’s positioning himself to oppose the latest round of devilry to assail the Reikland.

Such is Lohner’s reputation that most of his acquaintances, from the wealthiest of merchants to the lowliest of beggars, go to great effort to remain in his good graces. Everyone has a theory as to why the innkeeper is so well-connected, ranging from the sublime (he’s actually the legendary blackmailer Rudolph Gestromm, living out his retirement) to the ridiculous (he’s the displaced Graf von Jungfreud, meddling from the sidelines following his removal from power). It’s all conjecture, stuff that Lohner laughs off if ever it’s repeated in earshot, and many suspect he deliberately feeds the most outlandish stories.

Whatever the truth of his origins, it’s evident that Lohner sits at the heart of a formidable spy network – one which rivals that of the Emperor himself. It’s therefore just as well that Lohner has only the Empire’s best interests at heart. Or appears to… 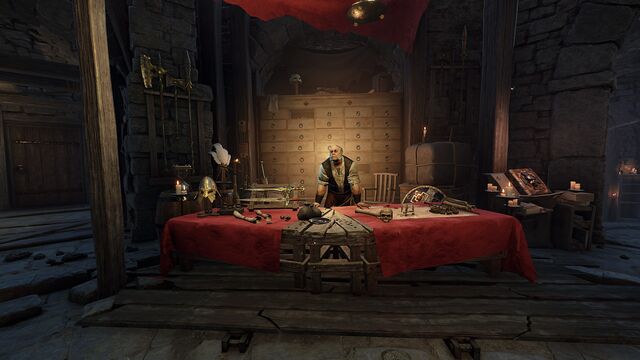 Introduced in 2.1.0 along with the first chapter of The Curse of Drachenfels, Franz Lohner's Emporium of Wonders sells various Cosmetics purchasable with Shillings or a select few Premium cosmetics for real world currency.

The reasons behind this are that Fatshark want to try to release content that involves gameplay for free while charging for a few premium cosmetics instead. By adding a few select cosmetics that you can purchase for real money it supports the studio and they are able to create more free content updates, such as the Curse of Drachenfels and Chaos Wastes.

Shillings are given as a reward for completing various Quests and Challenges as well as Daily Rewards.