The Empire is home to many knightly orders, each with its own traditions, rituals and rivalries. Many are religious organisations, dedicated to deities as familiar as Sigmar and Ulric, or to foreign divinities such as Myrmidia, but most claim warrior’s honour and martial pride as far more important than any godly blessing. Especially in these dark days, when the gods of the Empire seem more distant than ever.

After fighting more or less continuously since Ubersreik, Kruber found himself invited to join the Order of the Reikshammer. Quite how this invitation arose is the subject of some speculation. Kruber certainly did nothing to seek out such an honour, and suspects that one of his companions brought word of his deeds to the Master of the Reikshammer. Whatever the cause, Kruber was knighted, and rose in rank like foam to a tankard’s brim, and was granted the rights, responsibilities – and more importantly, weapons – of an Imperial knight.

As a knight, Kruber stands tall in the thick of combat, trusting to heavy armour and sturdy shield to keep him hale, or a great weapon to crush his foes before they recognise the danger.
- Vermintide 2 Official Website

Foot Knight is one of the four Careers from which Markus Kruber can choose.

This career is available at level 12, after Mercenary and Huntsman.

Knighted for his heroic contribution to the defense of Ubersreik, Kruber has – somewhat reluctantly – climbed the social ladder. Not fully comfortable in his new station, Kruber has nonetheless found new method and purpose in his never-ending battles, be they against the enemy horde or his inner demons.

In battle, the Foot Knight is strong as steel in defence and fearsome in offence, able to shrug off the mightiest of blows or shatter enemy ranks with a formidable charge. Standing tall in the thick of combat, the Foot Knight is the epitome of a heavily armoured, front-line melee warrior. 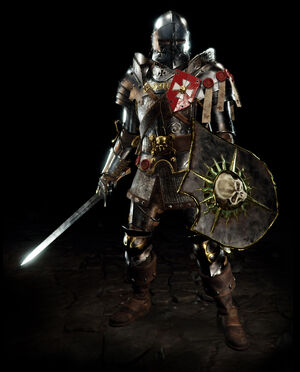