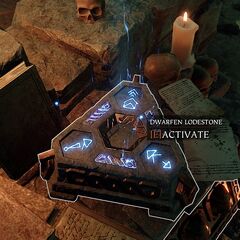 The Dwarfen Lodestone was found by Olesya and is the reason the Heroes revisit Ubersreik in the DLC Back to Ubersreik.

Fancy dwarfen widget that shows the way to something in Ubersreik. Well, three somethings, as it happens. Don't ask me how it works, but Olesya was muttering darkly about having an idea. Now, I've seen a few of Olesya's ideas up close, so if you want to leave for a couple of days, now's probably the time.

Each slot on the Lodestone corresponds to one of the Missions in the DLC and a Rune players have to find in this mission to transcribe to the Lodestone. Once all runes are found, the Lodestone can be activated to start a fourth, hidden mission: Fortunes of War.

For a guide on how to obtain each rune, check the Rune Guide.