Battle Wizards are the Empire’s ‘official’ practitioners of magic. Tutored in the famed Colleges of Magic, they employ a form of magery honed by the elven loremasters Teclis, Finreir and Yrtle. As with most elven ‘gifts’ these arts were born of necessity – of a need for the magically adrift Empire to play its part in the never-ending war against Chaos. The Colleges have thrived ever since; the Bright College most of all, for fire has ever been a welcome ally upon the battlefield.

The calamity of Ubersreik caused many folk to re-examine their choices. For her part, Sienna came to realise the power that came with greater control. Through supreme effort of will, she has learnt to temper her addiction, recalling half-remembered lessons from less-than-pleasant college days. This renewed discipline has served her well – fully in control of the flame for the first time, she is capable of feats never before dreamt of.

Battle Wizard is one of the three Careers from which Sienna Fuegonasus can choose.

This career is the first one available, while Pyromancer and Unchained are available at levels 7 and 12 respectively.

In order to find peace, Sienna had to temper her addiction. Her flame-lust will always be there, but she now dims it through more structured and organized means. She chose a touch of military discipline to deal with what she ultimately is – an addict. 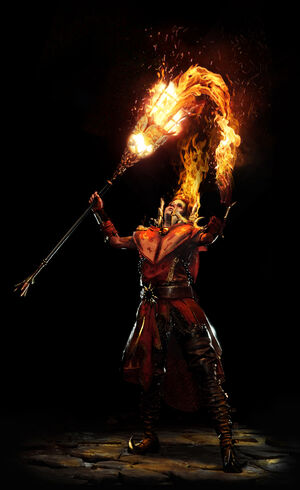